Shoot to heal, not to kill: Russia’s bioprinting leaders dream of a new national export

TO THE LIST
“What’s Russia famous for? The Kalashnikov – the AK47,” says Vladimir Mironov, chief scientific officer at 3D Bioprinting Solutions. “Well now we have a different motto: not shoot to kill, but shoot to heal – using a tissue gun.” 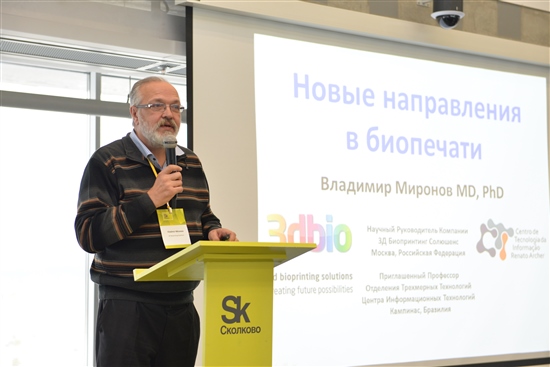 Mironov, whose company hit the headlines last year – and again this week – for its successful creation of a mouse thyroid construct using a 3D bioprinter, declined to give away any trade secrets of the new tissue gun to the audience of an international bioprinting conference held at the Skolkovo Foundation on Thursday, but offered a comprehensive overview of developments in what has been described as the third industrial revolution.

“When I first presented this principle in 2003, people said ‘Kremlin dreamers,’” said Mironov, whose company is a resident startup in Skolkovo’s biomedicine cluster.

“Now we have a society, five journals, an international congress, companies selling printers, and more making spheroids [the ‘ink’ used in the printers]. When people say to me: ‘organ printing is science fiction,’ I say: just look on the internet – it’s all there,” said Mironov.

3D Bioprinting Solutions made Russia’s first bioprinter, the Fabion, which it presented at last year’s conference. The thyroid construct was printed last March, and was proven to be fully functional after being transplanted into a mouse later last year, but once again made the headlines around Russia this week after being mentioned during a press conference devoted to Russian science.

At this year’s event, titled New Directions in Bioprinting and attended by leading scientists in this area, including nanotechnology professor Boris Chichkov of the Laser Centrum Hannover and Utkan Demirci, an associate professor at Stanford University School of Medicine, Mironov outlined global trends in bioprinting.

One of the major areas of activity is the printing of patches of skin and cartilage that can be used to repair wounds and are produced more quickly with a printer than by growing skin tissue in cell culture.

In a talk on the business aspects of the bioprinting industry, Yusef Khesuani, the cofounder of 3D Bioprinting Solutions, said major companies like cosmetics giant L’Oreal and chemical producer BASF, as well as U.S. consumer goods behemoth Procter & Gamble, are each pouring up to a billion dollars a year into the printing of skin now that products tested on animals are banned in the EU. 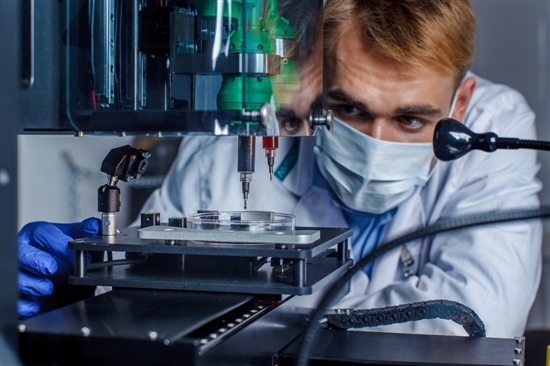 3D bioprinting is also being used in the search for a cure for baldness.

Other global trends include acoustic bioprinting, in which acoustic waves are used to manipulate particles and cells, and 4D bioprinting, when the printed matter takes on a new form by maturing after it is created. Mironov also discussed magnetic 3D bioprinting and in vivo printing – when the new tissues or organs are directly fabricated and positioned in the living organism.

“In vivo bioprinting is not science fiction, but what Russian, Chinese and U.S. scientists are working on,” said Mironov.

3D Bioprinting Solutions was the fifth company to produce a bioprinter, following two companies in the U.S., and two more in Germany and Switzerland.

While to the uninitiated, the idea may seem like something from a fantasy novel, Mironov insists printing organs is “really very simple.”

The first stage, he explains, is to make building blocks: in this case, tissue spheroids.

“The principle is very simple: add hydrogel [a water-based substance] and squash the spheroids together,” he said. This creates the “ink” for the printer – the matter from which the organ will be made. “The coalescence of cells is the basic principle of printing organs,” said Mironov.

The ink is then poured in layers into a form already determined by a digital model.

The ultimate aim of the bioprinting industry is to be able to print functioning organs, thus solving the huge problem of people around the world waiting for viable organs – often in vain. In China alone, there are 1.5 million people awaiting transplants, according to 3D Bioprinting Solutions.

Experiments such as that to create the mouse thyroid are a step on the way to achieving that goal.

Kirill Kaem, a Skolkovo vice president and head of the foundation’s biomedicine cluster, described 3D Bioprinting Solutions’ achievement as a “global breakthrough in science and, without exaggeration, a momentous occasion that marks the dawn of a new era in medicine.”

3D Bioprinting Solutions knows how to build a construct for any organ, said Mironov.

“Others have shown this too,” he said. “But can we print a [functioning human] organ? Time will tell.”

The speed with which the industry is progressing is encouraging: at the first conference, people had doubts whether bioprinting was in fact really viable, recalled Dmitry Fadin, 3D Bioprinting Solutions’ development director.

“The second conference was a war between advocates of different methods,” he said.

“And the third was about different practical applications – it just goes to show how fast this technology is developing,” he said.

“In this industry, the road from science to commercialization turned out to be very short.”