During Mironov’s presentation, he revealed that the company’s 3D-printed organ was able to restore thyroid function in mice with hypothyroidism — a condition in which the animal’s thyroid gland doesn’t produce enough hormones. Though the test subject was merely a mouse, the structure of the implanted organ accurately corresponded to the normal formation of a typical mouse thyroid. This revolutionary feat puts 3D Bioprinting Solutions at the forefront of bioprinting technology, despite its relatively short tenure as a company. 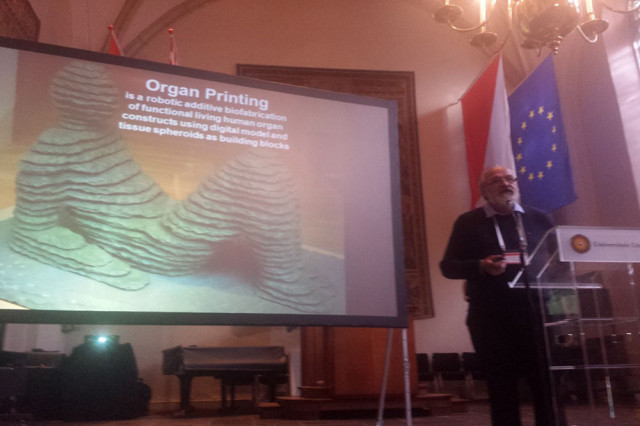 Using the Russian bioprinter FABION, the organization constructed the mouse organ last March (video posted above), with several scientific laboratories keeping a keen on the research in the event of its success. As reported by Russia Beyond the Headlines, successful testing may push those labs to begin manufacturing actual human thyroid glands.

“The reports presented in Utrecht indicate rapid development of this field attracting specialists from different disciplines,” says 3D Bioprinting Solutions Executive Director Yusef Khesuani. “Bioprinting is [a] multidisciplinary technology, and our work would have never been possible without our highly professional team and cooperation with both Russian and foreign laboratories.”

Though it’s clear the next step for 3D Bioprinting Solutions is to consider testing 3D-printed thyroids on human subjects, no official announcement was made regarding the matter. With many bioprinting firms hard at work successfully recreating cells and organs by way of 3D printing, it likely won’t be long before the medical field begins using this revolutionary technology for everyday surgeries.