TO THE LIST
As one of the fastest growing technologies across several industries, including manufacturing, medicine, aerospace and even retail, every single month and even week seems to bring with it groundbreaking discoveries or scientific advances in 3D printing processes, materials, and goods. With the New Year fast approaching, it’s time to look back on 2015’s most important 3D printing achievements, and reflect on what they might mean for the year to come.

Here are my top ten picks for the most important 3D printing news trends of 2015:

3D bioprinting and 3D medical applications are some of the most promising and important areas in 3D printing technology, precisely because they have already directly been used to save lives, and because the potential is there to save hundreds of thousands more. In 2015, we saw a cancer patient receive a 3D printed sternum and rib cage in a world-first surgery; firefighter Patrick Hardison receive the world’s most extensive face transplant ever thanks to 3D printed guides; the FDA approve the first 3D printed prescription drug; and the first successful transplant using a 3D bioprinted thyroid.

These are no small feats, and just a sample of how 3D printing can be used in medical applications—we haven’t even mentioned the hundreds of 3D printed custom prosthetics, 3D printed medical models, or even 3D software being used to help doctors and their patients. Luckily, the global 3D bioprinting market is set to be worth a staggering $1.82 billion in the next 10 years, meaning there are many more life-changing and life-saving advancements to come. 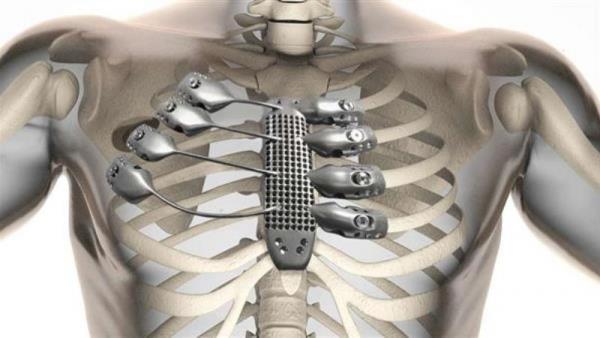 While on the consumer side, plastic 3D printing filaments continue to rule, 2015 saw metal 3D printing begin to take center stage for industrial manufacturers and additive manufacturing centers. In Q3 2015, worldwide sales of industrial metal 3D printers—machines capable of producing some of the most advanced, high-performance finished goods for use in the aerospace, automobile, and defense industries—were up more than 45%.

Market leaders include EOS, Concept Laser, 3D Systems, Optomec and SLM Solutions, who have all shown year-on-year increases in metal 3D printer shipments, however there are also several interesting new entrants. For example, Toshiba has unveiled a metal 3D printer that is reportedly ten times faster than its competitors; TRUMPF showcased a full range of extremely high-performance metal 3D printers; and Israeli startup Xjet is developing a proprietary inkjet printing technology for liquid metal that could make the large scale manufacturing of custom metal parts cheaper and more efficient than ever before, driving 3D metal printing into the mainstream. 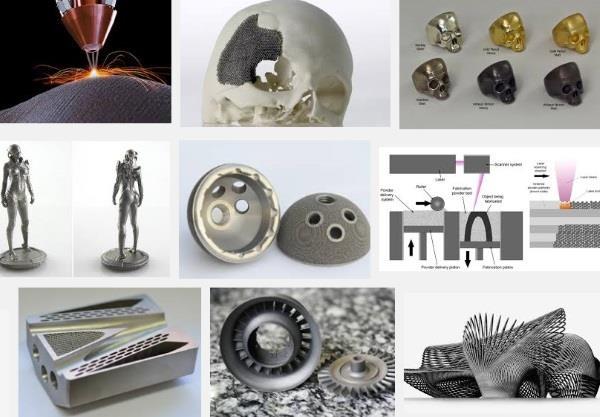 According to recent reports, our generation is experiencing the greatest wave of urbanization in world history, with over 800 million people forced to live in slums and an ever-widening housing affordability gap. At this rate, we’re well on our way towards a global housing crisis, with fewer resources and rising labor costs compounding the problem. 3D printed buildings, however, are a realistic and very promising solution.

In 2015, we reported on WinSun China’s record-breaking undertaking to build the world’s first 3D printed villa and the tallest 3D printed apartment building. Another Chinese company, ZhuoDa unveiled a 3D printed two-story villa that was assembled in less than three hours (although ZhuoDa later came under fire for their 3D printing technology as well as financial schemes). While these super-fast, out-of-nowhere Chinese 3D printed homes may not be the future of housing per se, many other companies are hard at work to create viable, safe, and cost-effective solutions for the housing crisis. Italy’s WASP created the Big Delta, a 12-meter tall 3D printer capable of building insect-repelling houses. Meanwhile, the Apis Cor offers a more compact solution for 3D printing houses on-site. Over on the sustainability side, ORNL 3D printed an entire house and 3D printed car that produce and share clean energy, providing perhaps the most advanced yet promising glimpse into our future. 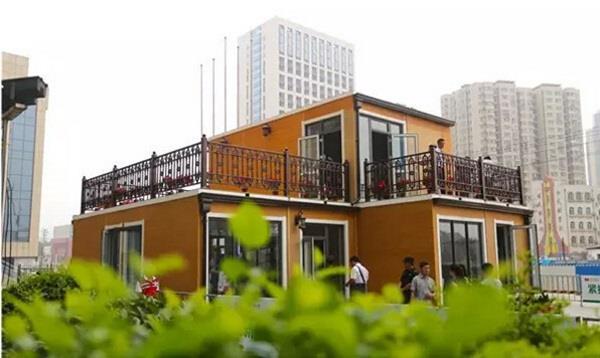 Speaking of ORNL’s 3D printed clean energy car, the automobile industry certainly took notice of 3D printing technology in 2015. Ford achieved its 500,000th 3D printed part, and Audi announced that it will use complex 3D printed metal components in production cars—the German company even took its 3D printing technology for a test drive by recreating a 1:2 scale 1936 Auto Union Type C race car entirely out of metal 3D printed parts. Perhaps most exciting, however, especially as we enter 2016, is Local Motors announcement that the first-ever road-ready 3D printed consumer car will soon be on sale for the surprisingly low cost of $53,000.

In 2015, three of the biggest names in sportswear stepped into the 3D printing ring, promising to finally bring high-quality branded 3D printed wearables to the consumer market once and for all. Adidas was first out of the gate, partnering with Materialise to announce the Futurecraft 3D series of 3D printed shoes. Shortly after, Nike patented its own 3D printing shoe technology. But, hoping to beat both to the finish line, New Balance’s 3D printed shoes became the first to have an official launch date: April 2016, just in time for the Boston Marathon. The future of 3D printed footwear is here. Sorry, Kanye. 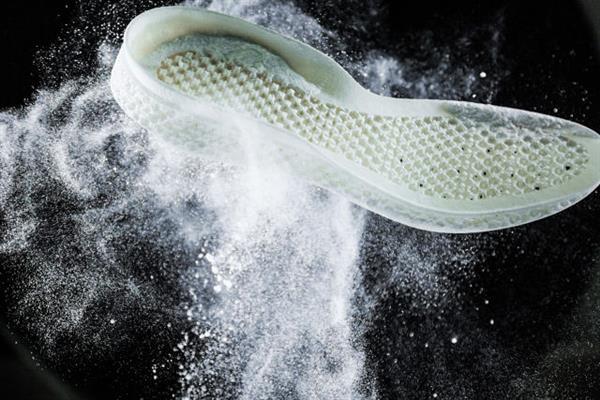 Though HP officially made its announcement to enter the professional 3D printing industry in 2014, when it unveiled its Multi-Jet Fusion technology, in 2015, the tech giant officially bet on 3D printing to secure its future growth by splitting into two publicly traded companies, HP Enterprise and HP Inc., with the latter vying to secure a leading position in the global 3D printing industry. Other major corporations to join the 3D printing revolution include Autodesk, with its open source Ember 3D printer, Canon, Toshiba, Michelin, Lenovo (one of the largest manufactures of personal computers in the world), and Ricoh. Even Apple surprised everyone (or did they?) when a patent was revealed that described work on a full-color 3D printer.

2015 is officially the year that international corporations took note of 3D printing, and for better or for worse, there’s no going back from here.

What would a good year-in-review list be without a little controversy? 3D printed guns, as always, managed to make their way to several headlines in 2015: In Australia, NSW citizens learned they could face jail for possessing 3D printable guns, and a loaded 3D printed gun was found in a meth lab bust. The US State Department continued to fight against users sharing 3D printed gun files online, and the EU considered banning 3D printing gun schematics in the wake of the Paris attacks. Meanwhile, legal questions aside, new designs and advancements in 3D printed weapons continued to emerge, including the first 3D printed railgun and a 3D printed AR-10 firearm. I, for one, hope to see much less of this kind of news in 2016, but I won’t get my hopes up. 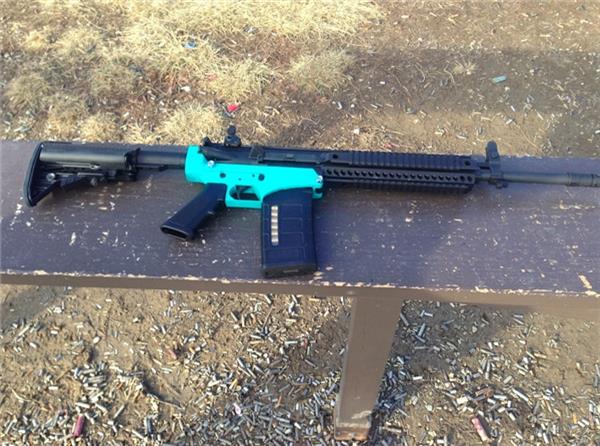 In 2015, 3D printing officially shed the stigma of being a prototyping-only technology. Major aerospace companies, including NASA, the US Air Force, Airbus and many, many others turned to advanced additive manufacturing to produce end-use, incredibly complex and mechanically-sound parts that were either not possible, or prohibitively expensive using traditional methods. 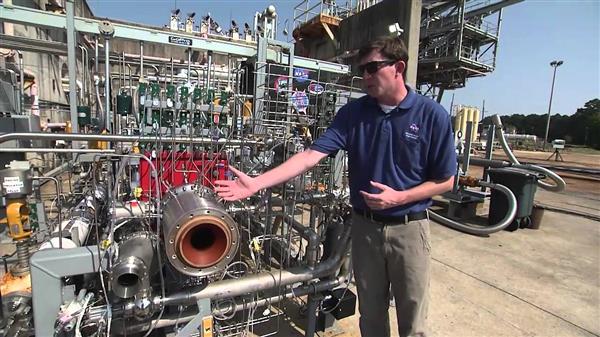 Okay, so there are 3D printers on 3D printers in 2015, but out of the hundreds of options available for nearly every purpose imaginable, there are quite a few 3D printers and 3D printer manufacturers that still managed to catch our attention.

For example, Poland’s Zortrax managed to triple sales of its M200 3D printer in 2015, however Taiwan’s XYZPrinting, maker of the popular da Vinci series, rose to the top, becoming the manufacturer with the largest shipments of 3D printers worldwide.

Formlabs launched its Form2 desktop 3D printer to great acclaim, and several other innovative 3D printing machines were either announced, unveiled, or officially brought to market, including: Voxel8’s electronics 3D printer; Nano Dimension’s Dragonfly 2020 PCB 3D printer; the Voltera V-One circuit board 3D printer; Stratasys’ Objet 1000 Plus; and Graphene 3D’s Romulus III. Again, these are just a few of some of the many, many exciting 3D printer options out there, and the level of innovation is downright astounding. 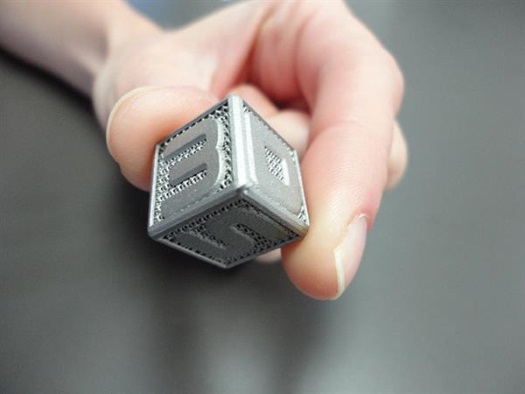 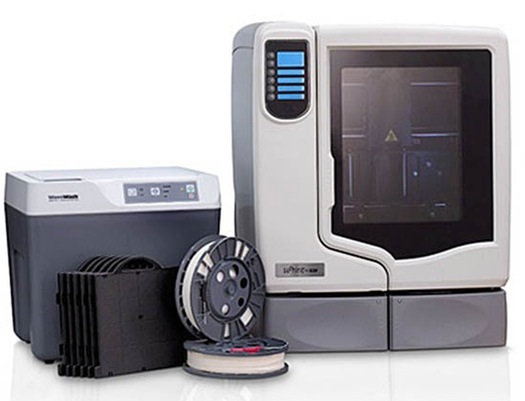 3D Systems, for one, lost an $11M arbitration case against the founder of Print3D; laid off 80 employees at its Massachusetts office; discontinued production of its $999 Cube 3D printer and shuttered its Cubify 3D printing marketplace; and to top it all off, saw its long-time President and CEO Avi Reichental officially depart the company. Needless to say, stocks are down--a full 9% as of yesterday following the Cube 3D printer/Cubify announcement--and the company’s future relies entirely on how well it can carry out its plan to “focus its resources and strategic initiatives on near-term opportunities and profitability.”

Things haven’t been any easier for Stratasys. The company announced a dismal $938M loss in Q3 2015, which it attributed to a $910 million write-down of troubled acquisition Makerbot as well as “increased uncertainty in the 3D printing environment.” Makerbot itself has taken a lot of industry heat. Legendary founder Bre Pettis stepped down in the wake of the permanent shuttering of its retail locations. The company also went through two rounds of employee lay-offs, and was accused of knowingly selling faulty 3D printers. Looking forward, new CEO Jonathan Jaglom has tentatively revealed plans to connect nearly 100,000 Makerbot 3D printers to the Internet of Things, social media, and the Thingiverse marketplace to create possibly one of the biggest interconnected 3D printing communities ever. There’s enough material here for an epic 3D printing Hollywood drama.

Despite seeing shares drop (interestingly, Stratasys saw their shares fall 6% after 3D Systems announced it was discontinuting the Cube), sales decline, and competition jump, both 3D Systems and Stratasys/Makerbot have made structural changes and are predicting long-term growth. Whether these Goliaths are able to bounce-back in 2016 or not, the good news is that the global 3D printing industry as a whole lot of Davids that are primed to enter the market and lead the way to success. According to a promising report from CONTEXT, as of mid-2015, over 500,000 3D printers were shipped globally, marking a major milestone for the industry. What’s more, the millionth unit is on track to ship by 2017, with upwards of 1M units being shipped every year from 2019 onwards. I couldn’t end this whole roundup on a bad note, could I? 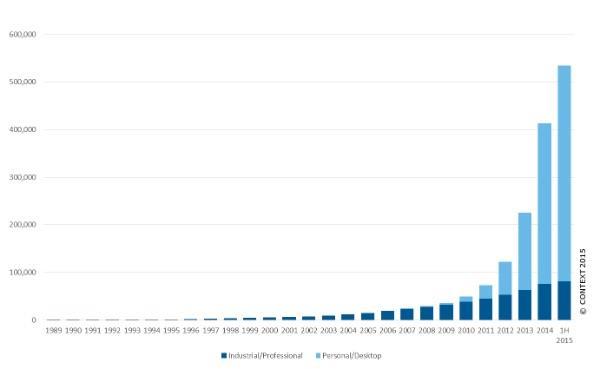 There is so, so much more that happened in the 3D printing industry in 2015 that just couldn’t fit in this list, including growing support and advancements in 3D printing education, 3D printed robotics, and sustainable 3D printing processes and materials. But at this rate, I’ll be writing right into 2016. What were the biggest, most important, or most impactful 3D printing news stories of 2015 for you? Let us know in the comments, on Facebook or on Twitter.