Here we are again with our Top 10 lists of 3D printers. This time we ventured into the exceedingly complex world of 3D bioprinting. Most commercially available 3D bioprinters are based on some proprietary version of a basic syringe/pressure-based extrusion of both paste-like polymeric substances and hydrogels (also known as bioinks in certain cases), which are basically gel-like substances containing high quantities of water and living cells. There are several variations and alternatives, but not always are these differences made public by the companies behind them.

Once again, we based our classification on entirely subjective evaluations based on how well known the 3D bioprinter is and how often we run into it being used for bioengineering and biomaterials research or other applications. Similarly, the list is actually a list of all the bioprinters (and bioprinting devices) that we are aware of and that are either commercially available or that are used to make commercial bioproducts. The list does not include two very fascinating projects which have not yet arrived on the market such as the ultra low-cost and open source machine by BioBots or the Printalive skin 3D printer which won a recent James Dyson Award.

The list also does not take into consideration the many University-developed 3D printers which are used internally and only for research. This is one of the widest areas of development. For example South Korea’s Postech University’s Intelligent Mankfacturing Systems Lab (IMS) has developed its own 3D bioprinters which use several different technologies including stereolithography-based and deposition based technologies.

EnvisionTEC’s 3D Bioplotter system occupies the leading spot in our top 10 because it is the only bioprinter made by a company that is already a leader in the 3D printing industry. It is basically a 3D bioprinter that works through a relatively simple extrusion process, invented by the Freiburg Materials Research Centre in Germany. Like any other 3D printer it transforms CAD models into physical objects, only in the case of this machine, Computer Aided Tissue Engineering is converted from 3D models and patient CT data into a physical 3D scaffold, with a designed and defined outer form and an open inner structure. 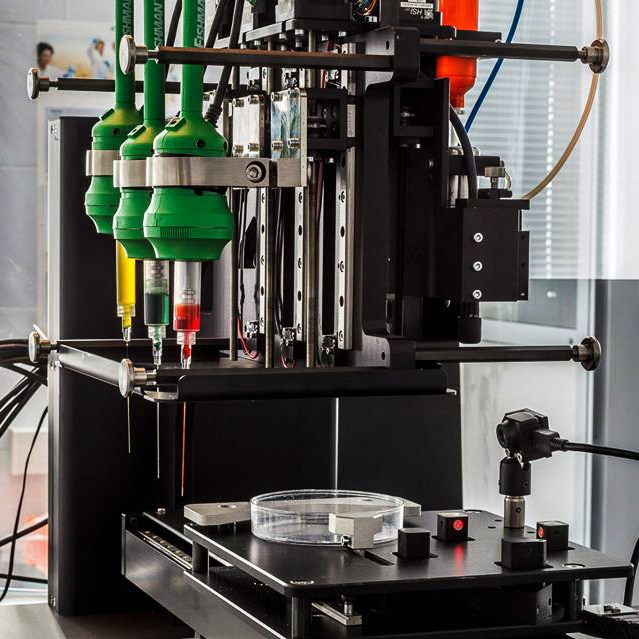 Like Organovo’s NovoGen MMX, the FABION 3D bioprinter was developed by Skolkovo, Russia-based 3D Bioprinting Solutions (3D Bio) exclusively for internal use. The main difference, other than the fact that one is based in the US and the other in Russia, is that 3D Bio has clearly stated the objective of 3D printing a functional and implantable human organ .

The company already 3D printed functional thyroids for implantation in mice, and, although that may mean very little, the team behind it has accurately studied all fields of 3D bioprinting research in order to create a system that can implement several different 3D bioprinting processes (including photoactive and electromagnetic) in one machine.